This is going to sound a bit cheesy, and I am not bragging about my breadmaking but, last week Darling Hubbie was out on a guided nature ramble in a disused quarry which is rarely open to the public and when they stopped for a break dh discretely took out his oversized homemade cheese roll and started happily munching away.

The Ranger leading the group spotted this from a short distance away and shot over excitedly exclaiming "is that amazing roll homemade, and why does it look so dark and crispy" (no prompting! Honest!)

He was eager to know all about it!   Dh explained to the best of his memory how it was made (ie kneading, rising and baking in the oven).  It turned out the Ranger uses a breadmaker himself but he leaves it in the machine to bake. This has prompted me to divulge my recipe.

In my previous post I mainly talked about my breadmaker and explained how I prepare the dough for rising and eventually for cooking but didn't give details of my recipe, which I highly recommend as it has worked brilliantly every time I use it!

Today I made a medium sized loaf of bread and 2 rolls (see below).

I have amended this post, as I realise, thanks to Catherine's comment, that I missed this part of the process out previously:


As I remove the dough from the machine I turn my oven on to heat to 100 degrees C.   Once it reaches temperature I turn the oven off.

Meanwhile I clean the work surface with very hot water which has a couple of spoonfuls of white vinegar in - antiseptic properties or something, I believe.

I sprinkle a dessertspoonful of bread flour over my squeaky clean worktop and swish the flour about to make sure it covers the actual spot where the dough will be placed.  I rub a little of the flour over my fingers and palms so that when removing the dough from the machine the dough doesn't stick to me or the worksurface.   The dough will be sticky as you remove it from the pan, just keep dipping your fingers in the flour from the worksurface, brushing the excess flour back onto the surface and easing the dough off the pan again. Once the dough is on the floured surface I work the edges into the centre of the dough all round until all the sticky edges have disappeared. I knead for a few minutes. The dough will feel firmer and will be getting drier. I continue working until I think it isn't going to stick to itself anymore. This probably takes about 5 minutes.

As I knead the dough I do add a little more flour to the surface if necessary, bearing in mind too much flour at this stage can spoil the mix of the bread - the flour that is in the dough already has had its gluten worked in the kneading in the machine.

Place the dough in your lightly oiled bread tin, cover with clingfilm (as described in my previous post), cover with a tea towel and place in warmed oven for 30 minutes to rise.

When risen remove from the oven and warm oven to 190 degrees C.  When oven is ready, remove tea towel and cling film, place tin in oven and cook for 30 minutes.

I hope this is not too much information now!

On a previous occassion I used the same mixture to make 8 rolls. My recipe book indicated they should be cooked at 190 degrees C for 15-20 minutes, however we tried this and felt the rolls were too soft, so I now cook them for 30 minutes (still at 190).


After cooling for 5 mins the bread will be easy to remove from the tin. 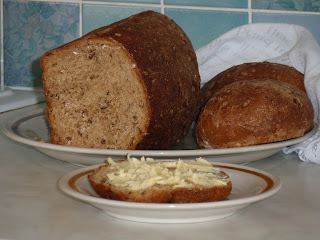 Once the bread has cooled, I usually leave it on a plate overnight,and cover with a clean tea towel   I find the bread will cut easier the following day.  I then slice the loaf and freeze what won't be used immediately.

I find this breadmaking process quite easy, however I did have a couple of disasters in the early days when I forgot to add the yeast!

I have put Izzy to one side and am working on a cat door stop which I hope to show more of next time. 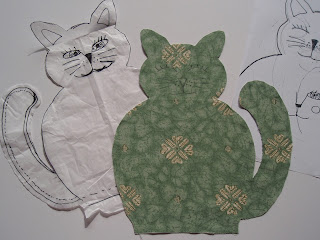 Posted by FlashinScissors at 23:09

I use my bread maker in emergencies as I have never really been satisfied with the crust. This looks a fantastic way to use it and I am going to give it a go. How long do you do the manual knead for?

I'm glad you asked, I hadn't realised I had missed the kneading process out! Thank you for letting me know! It's always useful to have feedback, showing what I am not spelling out or detailing sufficiently.

I've never timed it but from getting the dough out of the machine to putting it in the oven to rise probably takes about 15 to 20 minutes, so at a guess the kneading itself must take about 5 minutes, for a loaf.

I have amended my post to give more detail of the kneading process.

Hope you have a lovely weekend.

I think that homemade bread with butter and perhaps a little jam is my favorite thing to eat, but of the three I've only ever tried making jam. I should try the bread, you make it sound doable :-)
Amalia
xo

Thank you for visiting Amalia and I hope you do try making bread. I don't enjoy shop bread much now I make my own.

I used to make bread with wholemeal bread flour before I discovered the malted flour and that cooked up nicely too! The only changes for that were that I would make it with one quarter of the flour being plain white bread flour and only 10ml of sugar, everything else was the same measurements as the malted loaf.

Hope you enjoy making your bread. Have a lovely weekend whatever you are doing.

Hi Barbara, thank you for posting such a great recipe. I recently bought a kitchen scale so I will be able to put it to good use. But, my ingredients will be the American equivalent. This bread/rolls look amazing. Wishing you the best, Pat xx

looks yummy. i haven't used my bread machine in years because i eat too much of it when i make bread.

I hope you manage to buy your American equivalent ingredients. Perhaps you will be showing us your kitchen scales and bread too?

All the best, Barbara xx

Tell me about it! It sure doesn't last long I can tell you, but does help that we freeze some of it, stops us eating it quite so fast.

Sounds as though it works really well for you. I need to get into breadmaking sometime! xx

Thank you for your lovely comment, Amy, you seem to be awfully busy already with all your wonderful projects - however if you do attempt the breadmaking I am confident it will be a complete success. Betcha!
All the best, Barbara xx

Oh my, your bread looks amazing! (My boys know I really love them when I bake homemade bread, as I cannot eat it anymore.) There is nothing like the aroma of fresh baked bread filling your home. Your door stop looks like a fun project! I look forward to seeing it when it is done!

Thanks for the kind comments Renee. I'm sorry you can't eat bread, that's a real shame!

I am hoping to be post about the cat project soon.

Hope you have a great week!