I was going to post so early this month! I was almost ready a day early! Unfortunately I rushed taking my photos and then wasn't sure whether to go ahead writing a post with those photos ...... then every day since we seem to have been so busy! It's been sooo hot! I know, our hot is nothing compared to other parts of the world, but we just aren't ever prepared for the vast changes in temperature here in the UK!

Oh, and then last week we made the mistake of going shopping on Oxford Street on the very day of the Trump protests! It was quite scary. We went for lunch in a lovely little restaurant just off Regent Street and when we came back out onto Regent Street masses of protesters were making their way towards Oxford Circus.  I really detest the underground, and because the buses were all redirected we ended up walking from Regent Street to Victoria on one of the hottest days of the year. Phew!

Sittin' in the hot sun

I hope all those in this hemisphere are enjoying the very hot weather we've been having lately. Just glad its cooled down a bit today!

Last week I've been sitting in the hot sun stitchin' in the garden and FFO (Fully Finished Off) the Butterfly sachet. 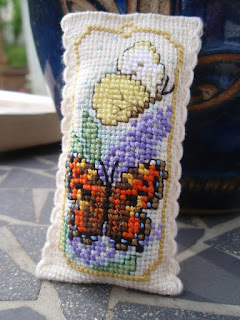 Sittin' in the hot sun, I stitched a little "beach hut"! Coming along well, despite the frog visiting again ..... and again!

Actually, "beach hut" is almost finished and I've stitched a camper van (more frogging unfortunately) into the picture ...... just some back stitch to go. I hope to be back with pictures for Gifted Gorgeousness on the 15th ..... watch this space ....  no on second thoughts don't watch this space, it's tempting fate! 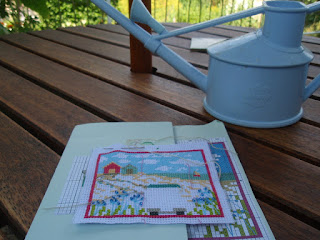 
Have you noticed, that when one is out, there's nowhere to leave a hat, if we happen to the have the weather for wearing a summer hat! So, last week I made time to stitch a ribbon to my sun hat ..... only for hanging up when its not in use! The ribbon is stitched in such a way that the hat can be hung up by the ribbon, but when wearing the hat it's quite out of the way and doesn't show! I know, I'm full of ideas no-one else wants or needs! 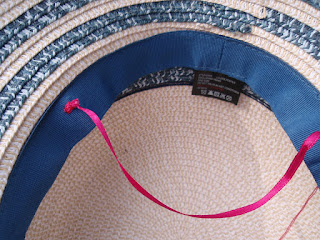 While I was sitting a stitchin', a magpie came along and I couldn't resist taking a photograph of him! 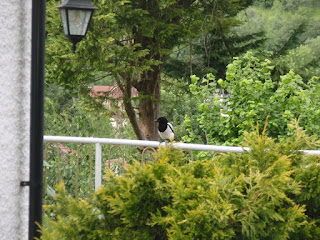 Oh, and then I just wandered round the garden trying to find the best of our roses. 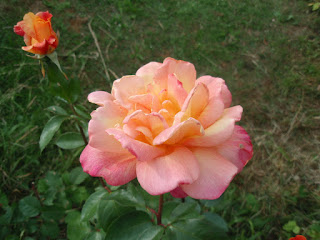 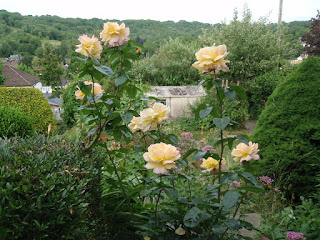 and a close up, as this is one of my favourites! 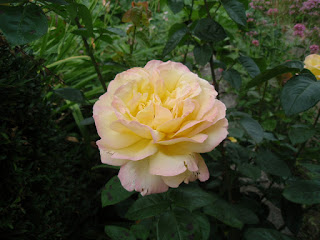 Or maybe red is best? 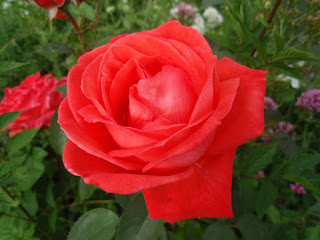 but then again white is quite nice! 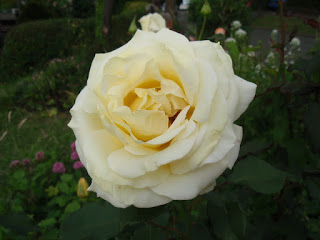 (Apologies to my Mum, I'm afraid the rose bush you bought for my birthday one year has shown its best earlier in the year and I don't have a picture!)

This is one of our wild areas where the slow worms can hide away from our cats; where brambles, wild strawberries and vetch grow (not to mention a good few weeds!).  You can see the slow worm from last time if you missed it HERE but I won't show it today as I know some of you don't like to see them! 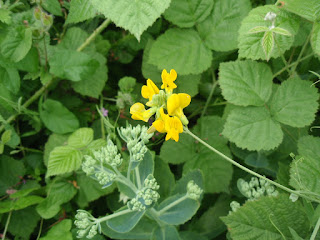 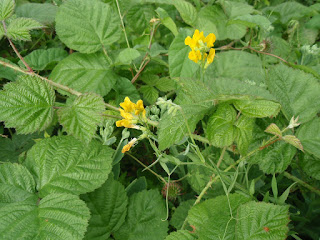 Hope you've been Happy Stitchin' too!

Posted by FlashinScissors at 18:14 18 comments:

Another Squirrel, and two tiny finishes!

This week I suddenly realised I had a DrEAMi (a project I just had to stitch this minute!) and I was chasing squirrels ..... so I am linking to Sandra's DrEAMi link party, do pop over and see some of the lovely projects that other people were sidetracked enough to make this month.


A few days ago I visited a lqs, intending to buy some fabric to finish one of my cross stitch projects. I only needed a couple of fat quarters, and I'd seen just the ones I wanted on a previous visit but had resisted buying! Unfortunately I couldn't find those same ones this time, but while searching I picked up a whole bundle of fabrics I just knew wanted to come home with me!

There were a couple of projects I had in mind, and I was very pleased with my colour selection this trip.

These thread catchers are really tiny and I decided I just had to make something for my friend to keep the thread catcher in so that, hopefully, she wouldn't lose it straight away.

I remembered seeing a small pouch on Pinterest that had been made for use as a sewing kit. I searched and found the tutorial "Snappy Coin Purse" on Rashida Coleman-Hale's blog i heart linen. 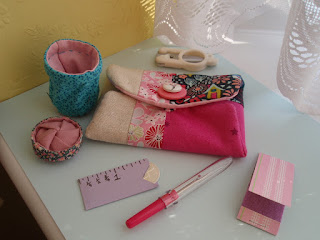 Rashida used fusible interfacing ..... I didn't have any so I used cotton wadding. I downloaded her PDF but found the pattern smaller than my 8" square of fabric so I added a 1/4" all round. My flaps only just overlap so I might have altered the shape by enlarging the pattern, but that's fine, it still works for me!

Oh, and, of course, I quickly started making the blue and pink thread catcher at the same time.

It was a bit fiddly because I decided the rim was too small narrow first time (meaning the base wouldn't push up inside it properly) so I took it apart and started again. I'm really pleased with the finish the way it looks so far, and I will eventually update my tutorial with some fine tuning. This was the fourth one I've made practically finished, (it was a matter of finish the hem or write my blog post!!) and I think it is the best one so far!

I even learnt how to use "pie" to find the circumference of a circle (but that's another story) ..... maths has never been my strong point. 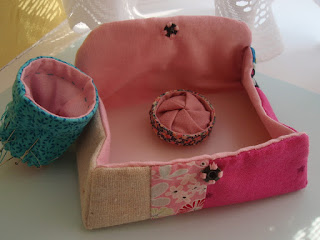 there were a couple of other items I added to make it a proper sewing kit. 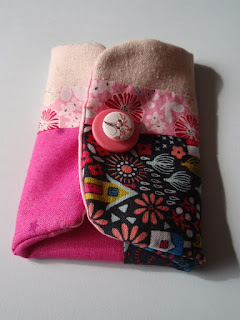 All in all this was a sweet quick DrEAMi project!

Hope you've all been busy stitching this week too!

Posted by FlashinScissors at 23:07 19 comments: