Gosh, Hi there everyone! It's been a while! Thank you for dropping by.

I don't know where the time has gone! There has been so much happening, but nothing too interesting!

Oh, I guess I could tell you about the day we went to a café in a little side street in Streatham (South London). DH and I were sitting quietly enjoying our food ..... I thought there was a bit of a commotion outside, looked out the window to see the road blocked by a few Armed Response Units and "plain clothes" police cars, oh and about a dozen very tall policemen, all armed with those mean-looking machine guns you see on tv these days. I thought "This cannot be real", and was looking around for the movie crew ..... but they weren't there, it WAS for real!

It was a bit scarey at the time, coming as it did not long after the terrible attacks in London.

Don't even know what happened, you never do with these things! A flash car had been stopped and surrounded, right outside the café, we had a grandstand view. But this was the one day I did not have my camera with me!

We could see the suspect with his hands on the wall, armed police surrounding him, we then saw the sniffer dog arrive ..... doggie was led to said car, did his sniff around - inside the car, and in the boot ..... and off went the doggie crew.

Dear Hubbie decided to have a look outside the café and one of the armed policemen's voices boomed out "Could you step back inside please, sir", next thing we had an armed policeman standing right across the open doorway of the shop to prevent any other joker from leaving. He then popped his head in and said "It shouldn't be too long now, once we've all gone you can leave the café whenever you wish."

We were reasonably happy sitting at the back of the shop out of the way, but I was still worrying in case we were about to see something like the awful scenes at Borough Market!

I disappeared to use the loo and by the time I returned all the police had gone, and the road was open again. So I don't know if the suspect was arrested or not! I would imagine so, as they seemed to know what they were doing.

It has recently been announced that the police have prevented 5 terrorist attacks within minutes prior to their taking place, due to their surveillance operations.

But anyway, I digress. I wasn't going to talk about all that, but now I have!

I've been following Lori Kennedy's Spring Quilt Along over at The Inbox Jaunt (which you can read about HERE) and had been trying to resist the urge to join in, but last week I saw a lady showing her version of Lori's quilt and I lost the battle!

I had some 3" squares I bought at a local quilt show a couple of years ago, and I'd been wondering what I was going to do with them ..... this seemed just the ticket!

These are my HST's made from my 3" squares ..... if you quilt you will know what I mean ..... if not you can read about Half Square Triangles HERE.


I managed to stitch my 4 rows but unfortunately realised 2 of them were orientated wrongly, so some ripping has ensued! I'm almost ready to stitch them together again now.

Should you be interested in Lori's Spring Quilt-a-Long she has sumarised all the details HERE.

Oh, and in the evenings, while watching recordings of  "The Chase" and Law and Order - UK I've managed to work on my cross stitch.

Last time I was here: 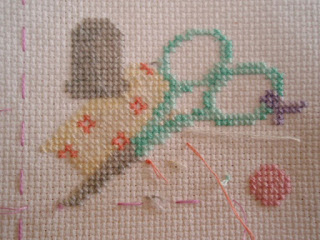 Since then I've stitched the green cotton reel and started on the other reels. 'Fraid this has been slow going as our sweet cat, Tom, has decided he needs some "me time" in the evenings, and demands to sit on my lap. As he is such a big cat there really isn't room for me to stitch as well as cuddle him! 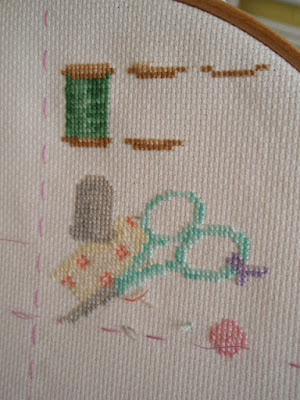 I have a few finishes to share, but no photos ready yet, so I hope to be back to show soonish!

Posted by FlashinScissors at 20:55 23 comments: