What goes around, comes around - Spiral

Hello my friends! (Apologies in advance, this will be a longish post!)

I'm back! At least I'm hoping this isn't just momentary! And WE FIXED IT OURSELVES!!

Some of you will already know that the other day I found my computer wouldn't even turn on.

Well, after a whiz of a neighbour came to our aid, investigating our laptop when we were really stuck, although unfortunately without much success, today DH had a go!

We knew our neighbour had pressed "Start" and F2, which starts you up in "safe" mode, and then he had run Auto Repair which failed, so today DH tried Auto Repair again which failed again. He then clicked on "Advanced Options" and chose "go back to previous restore point".

Because we've been very naughty and not backed up for ages our restore point was 31st October 2017.
The computer told us we would lose data and it would restore back to that point, so DH connected our external hard drive, clicked on "Restore Now" and waited ...... After a short wait the computer burst into life!

We had both been resigned to the fact that we were going to lose all that data, but we were so lucky that for some reason we haven't lost any!

This year I joined a group of art quilters called "The Endeavourers". This is the third quarter of the year, and our third project is "Spiral".

And now, to celebrate my being able to upload my photos again:

But that wasn't how I originally envisaged it, and if I'm really honest I struggled trying to think what to do and how to make an art quilt as such.

Back when our topic was announced I had and idea of making a lap quilt. I saw a photograph on Pinterest of a fern and a snail and it gave me the following idea. I've even stitched the squares together and cut and ironed bias strips ready. 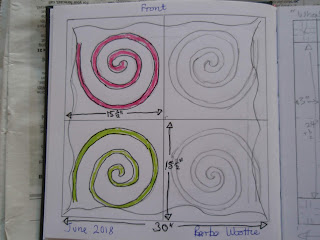 I planned the backing fabric too: 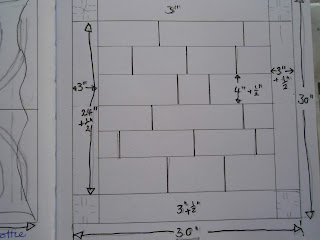 But as time was slipping by I realised I was trying to do too much again!

Soooo! Plan B! I'd seen ticker tape quilts and thought I could do something along those lines: 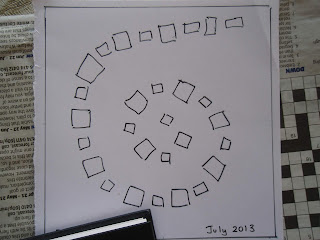 And then, as panic was setting in I discovered, probably like most quilters, just how many triangle offcuts I had! So, one day I took them along to my handicraft group and was showing my idea to some of the ladies (and I'm sorry but we are only ladies, we did have one man join us for a short while, but I don't think it suited him).

But I decided, after much playing about with the pieces that they looked better with large pieces becoming smaller toward the centre. Oh, then I wondered how to keep the pieces in place without pins and remembered a while back winning a book "Crafted Applique" by Lara Buccella of BuzzinBumble. Now I can't tell you how she does it, you'd need to read the book to find out, but suffice to say I found her method worked well for me ...... Thank you Lara! 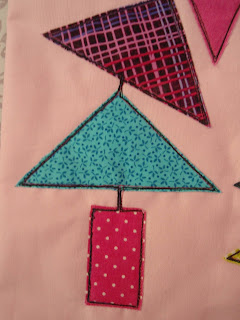 Then to give it a "sketched" look I machine stitched around all the pieces, about 1/16th" from the edge, initially in pink cotton. Then, as it didn't show up sufficiently I tried purple (my fav colour). Still it didn't look right, then I popped over to one of my favourite blogs - the blog of Josie - "Sew for Soul" to read how she does this, and found she advocates using black thread. Having admired her method for years I've finally tested it out! 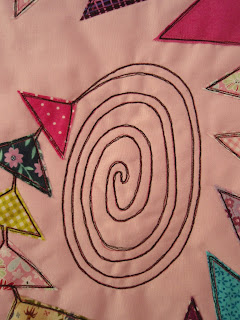 I was really nervous how to make my spiral in the centre, but used a Frixion pen to freehand draw  in some lines. After stitching I was able to use a warm iron to remove the pen lines.

I had originally intended to add a curved border but in the end I was running out of time and was determined to finish this time, so I finished my backing using the "bagging out" method. 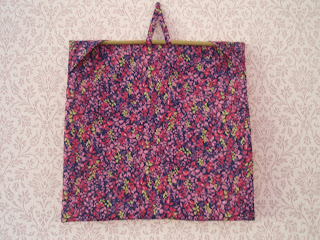 I even remembered to add corners to hang my quilt from ..... and with a branch (hurridly trimmed by DH)  from a hazelnut tree I fashioned a loop to finish the hanging. 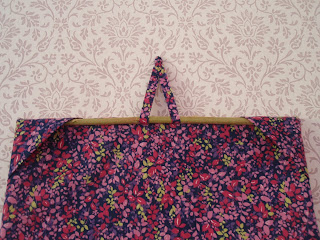 Please excuse me if I haven't visited you lately, this wonky computer has taken up so very much time this week!

I have really enjoyed making this quilt and I can see lots of other things I can do with this method of quilting.

Oh, btw, I am not being recompensed for mentioning any products in this post, and have only done so because I like them and found they work for me.

Do pop over to visit The Endeavourers blog where you can see all my fellow Endeavourers' wonderful Spiral quilts, oh, and to read how I named my quilt!

Posted by FlashinScissors at 18:30

A swirly quirky finish, I love it! :)

I enjoyed learning more about how you made this lovely quilt and I'm very glad to hear your computer is working now :)

Backing things up - you mean that's a 'thing'? (lol). Your spiral turned out wonderfully, despite all the angst you went through during creation of it. And....so glad your computer is working!!!

Congratulations on breathing life into your computer again and making such a charming quilt. Love the colours!

Glad you have your computer working again Barbara. I LOVE the spiral quilt, what a great piece of work. Your centre spiral reminds me of a Hundertwasser spiral and I am very fond of those! xx

Glad your computer is fixed. You must have picked up a virus somewhere. You KNOW I love this piece, and I was really interested in reading your process in creating it.
xx, Carol

Great for you that your husband managed to fix the computer problem.
That Spiral Quilt looks fantastic. What a great and creative way to accomplish the assignment for this month.

What a great spiral!

What an amazing quilt - I love the sketched look you have created. Yay to your husband for fixing the computer x

Your quilt reminds me of a firework going off, it just fizzes with fun :) Hope your technology woes are all behind you now too.

I love your little spiral quilt. I always think machine sketching always looks better in black. Your design and stitching is inspired and all that process has resulted in a most delightful quilt. Aren't computers a pain in the proverbial. So happy you didn't lose all your 'stuff'.

I'm glad you're back on track again, darn computers.
Your spiral quilt looks great, I love all the colours.

I would probably die if I lost anything on my computer although I have so much, I wonder if I would even miss it! I have scheduled regular backups though so hopefully I am safe. Your little spiral looks so fun and happy!

Sorry to hear about the computer problems! I have all my photos on a USB stick but I'd panic if I lost that!
The quilt is so much fun, I love the spirallling triangles, they remind me of a firework coming out of the rectangle block.

I am so glad to hear you were able to restore your computer without losing data. What a relief! Your Spiral quilt turned out great! Thank you for sharing your design process from start to finish. I always find that it fun to see how a project came to be. Lovely work!

Loved hearing about how you created your spiral quilt block. Its very clever Barbara.