I’ve suddenly become interested in knitting. It happens once in a while! Usually when it’s cold!
I had all this wool hanging around, found a pattern I liked and hey presto. 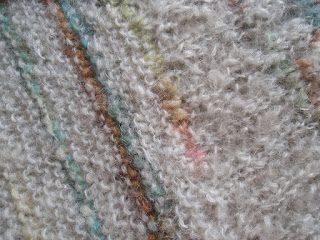 Talking to my sis the other day I groaned that my wrists were hurting a bit after knitting so much, and complained I couldn’t knit fast enough, she suggested I tried Continental knitting which is supposed to be less strain on the wrists, so I’ve been investigating via utube.
Sis also suggested other methods of knitting which are meant to be quicker than English knitting - Lever, Russian and Portuguese, but they seem a little awkward to me - not that I won't try again some other time.
Anyway, I've spent a fair amount of time this week trying them out and I think I will probably be using Continental Knit in future. And here is a link to a 5 minute Continental knit tutorial which I found quite easy to follow.
Go on, you know you want to ...... have a little go! 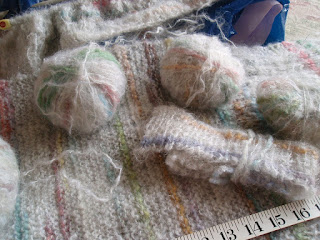 Mind you, I do hope I have enough wool or I will have to rip it back - again!
The handy thing about blogging is that it makes it easy to keep track of when the knitting reaches a certain length. 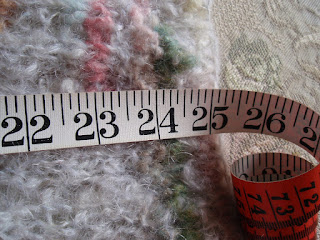 Posted by FlashinScissors at 16:36

Knitting in winter is very comforting.
This work is looking great Barbara.
Hugs from Spain

Liked your blog on knitting. Enjoyed the link to continental knitting. There are so many YouTube videos about continental, Portuguese, lever and English. Lots to learn from.

There are so many ways to knit! I made myself a pair of leg warmers, to beat the cold and to quench the knitting thirst.
I hope your stash of wool will be enough and you don't need to undo any of your hard work.

Good heavens, I didn't know there were all those different types of knitting! I've heard of continental of course but none of the others. I taught myself from books way back when and I guess at that time there was really only one way. I've heard that continental is faster but that people have trouble with the purl stitch. I actually did try a few stitches with it tonight and it felt really awkward. I'm sure practice is the key.

I can't knit, but I know my mum's method is much better to watch than M-i-l's. Mum leaned in Norway so it might be the continental method, she picks up the next stitch like crochet rather than using the other hand to wrap the wool around

Super work on your knitting, it looks lovely. I haven't knitted in years, my hands are not good at holding the needles, maybe one day I'll try again, happy knitting

Watched the video Barbara - it looks worth a try although I am knitting the lacy socks at the moment so I shall not be trying it out too soon. My mother always knitted without taking her hands off the needles but not with the yarn on the left though. Seems like there are so many different ways to knit. Hope you dont run out of yarn. xx

I love knitting in winter too, your knitting is looking great!
Kisses

Interesting post Barbara thank you for the link. I did the English way for so long just because that is how my Gran showed me and we were taught a little in school. I now work in a flicking movement while still keeping my fingers on the needle, what ever works best and no sore wrists. Love your progress its looking good.
Julie C x

I didn't know that there were so many different types of knitting Barbara, so thank you for the link! I generally prefer crochet myself and it is always nice to have a change from stitching to creating something with wool. Have a good week! Hugs Christine xx

Your knitting is beautiful. It's funny how you can forget about knitting for ages then suddenly you here the needles calling. I've heard continental knitting is easier on the wrists too but I find it slower - only because I'm not so used to it, I think. I'm glad you've found a style that you like and I hope you don't run out of wool :)

I'm glad you found something that works better for you! I've only knitted scarves and I'm good with them right now.
Pretty wool!